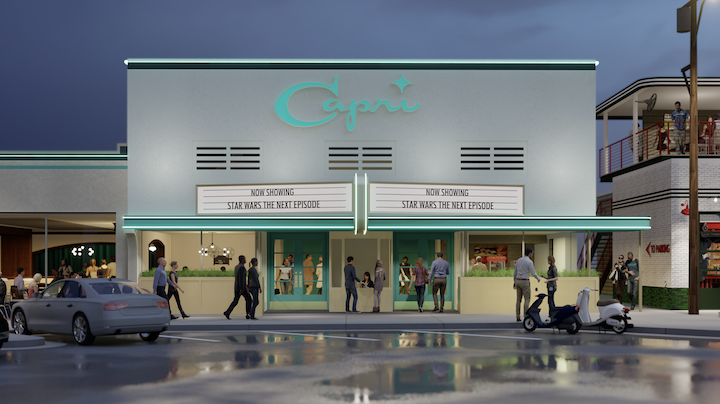 Construction fencing surrounds the front of what was once the Capri Theatre, Seabrook Paint Company and James Patterson Photography in Jackson’s Fondren Business District.

While nothing is happening on the outside, demolition began late last year on the interiors of the three buildings.

That’s the first step in a $13-million project to bring to life an entertainment venue that will return the Capri to its life as a movie theater, transform the former paint store into a restaurant with A full-service bar plus 10-lane bowling alley and turn the former gallery into a tiki bar.

David Pharr, a member of the development team, said the interiors of the three buildings had much to remove.

“It’s not surprising but we found a little bit of asbestos in the paint store and that’s been remediated,” he said. “We’ve taken the back wall off the paint store so we can  add the bowling lanes.”

The Capri, High Ball Lanes restaurant, bar and bowling alley and The Pearl Tiki Bar are expected to open for business by the end of the year, he said. Parking for the businesses will be located behind them.

Ed’s Burger Joint, which will expand the footprint of the building most recently occupied by Butterfly Yoga and include a rooftop bar, is part of the same development but construction will not begin until the second phase of the project.

What makes the Fondren Strip development unique is that it will be an entertainment destination with multiple activities, Pharr said, noting options where friends and family can gather as well as choices for fun date nights.

The exteriors of the buildings after renovation will have a vintage vibe similar to how they appeared when the movie, “The Help,” was filmed in Fondren. Ed’s will take on the look of a vintage Texaco station, a throwback to what it once was.

Pharr said he and Jason Watkins, who compose the Pix Co., have worked to transform Fondren for the “better part of a decade.” They acquired the Capri in 2012 and made improvements to the inside so it could serve as the site of Jackson’s first TEDx program in 2014.

“Along the way, Jason and I did the work to get the entire downtown Fondren district on the National Register of Historic Places, which allowed us to historic tax credits to finance construction,” he said.

Wier Boerner Allin Architecture, Cox & Shackelford and Hattiesburg restauranteur St. John are members of the development team along with Pharr and Watkins. AnderCorp. is the contractor for the project.

St. John expects Ed’s Burger Joint to open in the spring of 2022.  Construction on Ed’s should begin before the first phase of the entertainment district is completed, he said.

Announced in October 2019, the Fondren Strip project got put on hold with the onset of COVID-19, St. John said. “I think that was the right move,” he said.

When in full operation, the Capri, High Ball Lanes, The Pearl and Ed’s are expected to employ about 125 people and operate two shifts every day of the week, said St. John, who will be the managing partner responsible for the operations of it all.

Ed’s will serve the same menu of burgers and outrageous milkshakes that it’s known for in Hattiesburg, St. John said, and feature a rooftop bar where craft cocktails will be available.

“Our biggest fans are people who come from the Jackson area,” he said. “We get a lot of Jackson people on their way to Florida or in Hattiesburg for sporting events.”

Movie patrons at the Capri will have access to both a concession stand as well as a food and drink services while they occupy reclining seats with tables between them. The Capri will use a ticketing system so moviegoers to select their seats online in advance or at the door.

Servers will be able to move between the Capri, High Ball Lanes and The Pearl.

High Ball Lanes will serve a menu inspired by St. John’s Crescent City Grill in Hattiesburg, while small plates with a Polynesian bent will be the attraction at The Pearl.

“Tiki Bars are an interesting concept,” St. John said. “They are such an escape.”

Pharr said construction on the entertainment district will revitalize one of the last underdeveloped commercial parcels in the Fondren Business District. “It’s going to enhance the existing restaurants and offer something new,” he said.