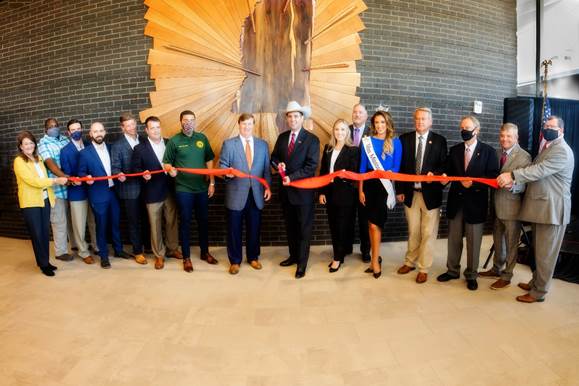 JACKSON — The new Mississippi Trade Mart officially opened to the public with a building dedication and ceremonial ribbon cutting.

“This is an historic day for the state of Mississippi,” said  Commissioner of Agriculture and Commerce Andy Gipson. “I am proud to unveil the new Mississippi Trade Mart and excited for the endless opportunities its expansive and state-of-the-art facilities will provide. I want to thank the entire Mississippi legislature for authorizing the $30 million funding to build the new Trade Mart and make improvements to the Mississippi Fairgrounds. I would also like to thank U.S. Senator Cindy Hyde-Smith, former Mississippi Governor Phil Bryant and Mississippi Governor Tate Reeves for their support in this endeavor.”

The new Trade Mart on the Mississippi State Fairgrounds will serve as an economic boost for the state. Every year, the Trade Mart hosts more than 200,000 people at the nearly 80 events held. Attached to the Mississippi Coliseum, the new structure expands the functionality and flexibility of both facilities, making it more marketable for hosting a wide array of events. The new Mississippi Trade Mart is 110,000 square feet, and includes a lobby, a 2,500 square foot commercial kitchen, two cafes, a reception area, a “front porch” area and three massive trade halls. The trade halls can be configured to provide a seamless connection to the Coliseum’s arena floor, allowing for larger trade shows and events than ever before. The “front porch” area provides a large, covered space for exterior events and opens onto a new plaza that is shared with the Coliseum, which recently underwent a $2.2 million renovation.