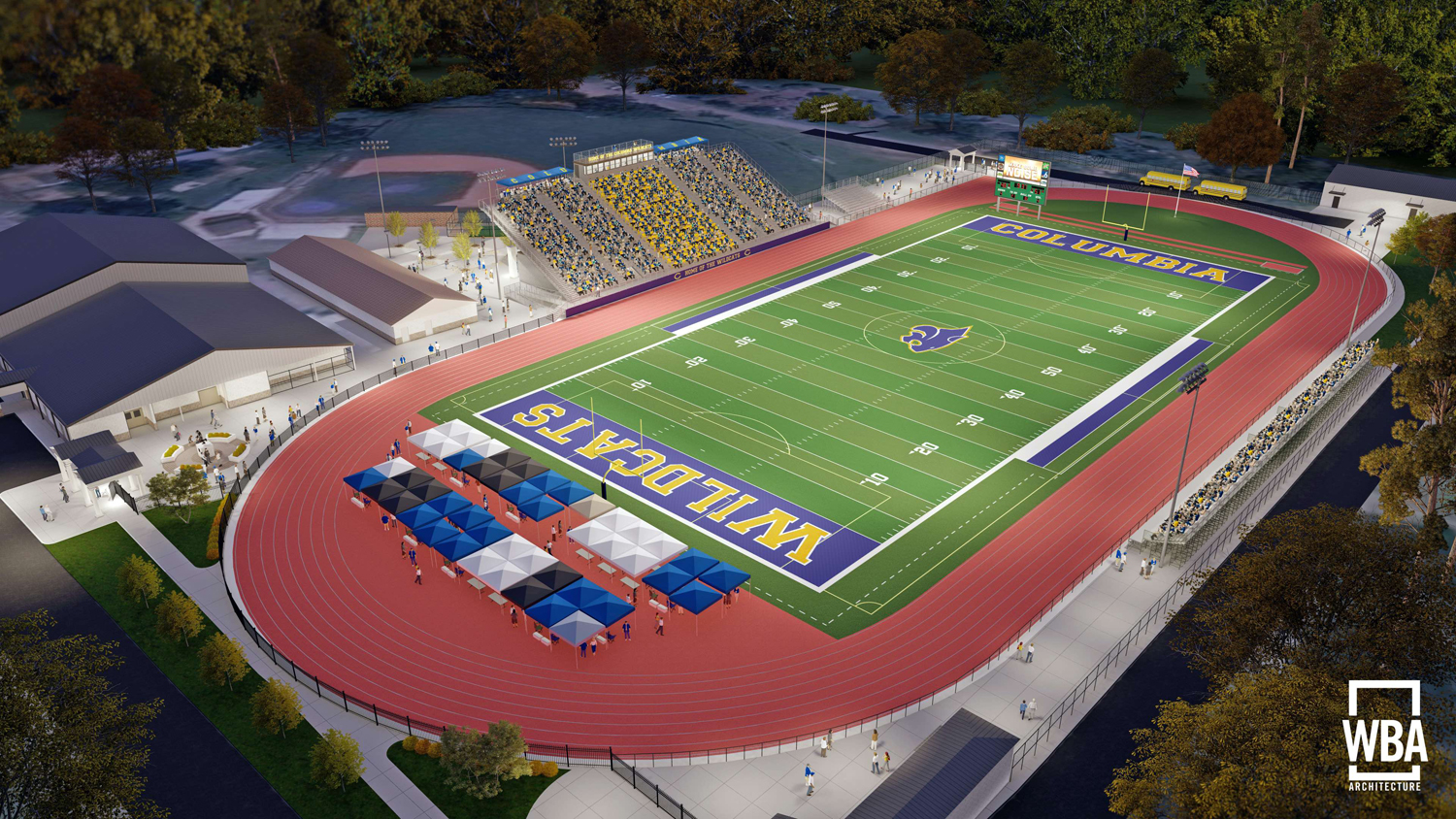 As cranes worked in the background, Columbia High School broke ground Monday morning on its new football stadium that is sure to be a crown jewel in Marion County.

Columbia Superintendent Jason Harris likened the day to a “new birth,” comparing the groundbreaking to the student athletes who will get their start on the new field, much like how arguably the greatest running back in history, Walter Payton, did.

“This stadium has served the community of Columbia and Columbia High School since the 1950s. However, grappling bleachers, broken concrete, worn-out restrooms and out-of-date concessions will give way to a new state-of-the-art stadium,” he said. “We’re excited to assemble a premier facility for our student athletes, their families and the community to enjoy for many years to come.”

When Harris first toured the facilities three-and-a-half years ago in 2017, he said it was obvious to him the stadium was built in the ‘50s, sparking the desire and his vision to build something truly special. He considered remodeling, but it wasn’t financially feasible. The only logical choice was to start over and construct a new stadium, and in his very first superintendent evaluation he told the Columbia school board he wanted to build a stadium.

The stadium is being funded through various routes. The district received a grant from the NFL that will cover more than $250,000 of the estimated $1 million cost of the new turf. There are also private donations that will go toward the estimated $6.2 million total, but Harris said all of the finances have not been finalized.

The stadium will have a total capacity of about 3,500, with the home bleachers seating 2,500 and the away bleachers seating 1,000. There will be 550 yellow chair-back seats on the home side, as well as eight cabanas at the top that are already spoken for, according to Harris. Each cabana will seat 12 and will include catered food.

Harris said the current target date is to have it completed by Aug. 6, with the home opener scheduled for Sept. 10 against Petal in Week 3 of the football season. That gives construction about a month of leeway to account for potential delays because of weather.

“I’m just so excited for the community to have a facility that resembles the passion for Wildcat athletics. Not only Wildcat football, but we’ll be able to host band competitions, soccer, track — we haven’t had a regulation track in Marion County. This is bigger than just football,” Harris said. “Wildcat athletics are the heartbeat of Columbia. I’m just excited and really thrilled.”

Following the current demolition of the bleachers taking place, the visiting locker rooms will be renovated along with the concession stands, then the new bleachers will be installed. The turf will be the last aspect installed, which should take about a week.

“This stadium, with us moving up to the 4A classification, will be one of the best ones, if not the best, in the state,” CHS head football coach Chip Bilderback said. “I expect to see an increase in participation by our student athletes that want to be able to use it. And with that, there’s going to be more kids we can reach as coaches, so that we can challenge them to be the very best versions of themselves.”

Bilderback added that Architect Jamie Wier’s design truly ties Columbia High’s past to where it’s trying to go in the future. He said there’s not a week that goes by when someone doesn’t ask to be let in to take a picture with the Walter Payton statute, and they want to see where “Sweetness” played. With Wier’s design moving the statute from no man’s land behind the end zone to the front entry plaza, it will be properly displayed for all to see it once they enter the stadium.

Bilderback added the investment being made into this stadium is for the fourth-grade student gaining more interest in playing Columbia High football.

“It’s going to inspire generations to come to be a part of this,” he said.

CHS Principal Braxton Stowe said it’s a great opportunity for the students and community to see progress, and it gives them something else to be proud of. While the school’s participation is already very high, Stowe said the new facilities should make it increase even more and could allow the school to add even more sports.

Eddie Payton said the new stadium will be the pinnacle of what a high school stadium in Mississippi should be, and the shining star of Mississippi will be in Columbia. He added that it being named after his brother means a lot to him.

“(Walter) loved Columbia, and Columbia loved him,” he said. “As long as you have a facility like the one Jamie is going to construct here, your kids will be proud to run out on that field with Walter’s name and wear the blue and gold. People will come to see Walter’s field, but they will come to watch your kids, who are the next generation of Walter Paytons.”

Eddie added that to see the field where he and his brother scored their first touchdowns before starring in the NFL become a living monument for Walter shows the commitment and what the city can do when it works together.

“You’re not going to get much better than that,” he said.

When the architecture firm who designed the new stadium, Wier Boerner Allin Architecture, shared their artistic renderings of the stadium, it was shared on social media more than 40,000 times.

To read the full article clickhere.